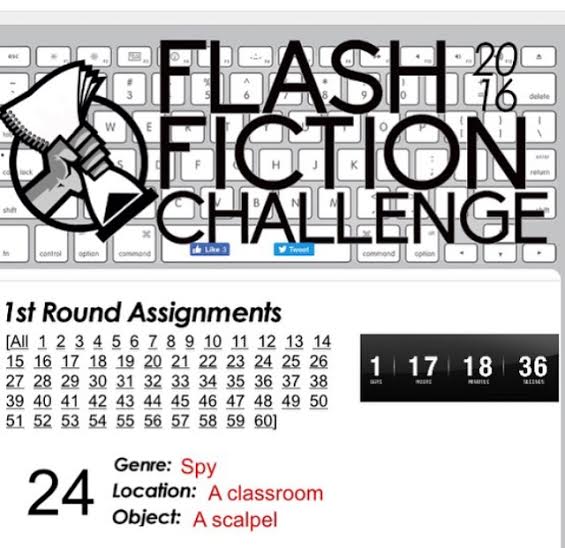 Last summer, I started my first flash fiction challenge. I only made it through the first two challenges out of four. That is alright though. The fun of making myself write in areas that I am not the most familiar is good for me. It challenged me and that is the point of the challenge…at least for me. To top it off, the judges give you feedback of how the writing could have been better and what they liked about it.  🙂 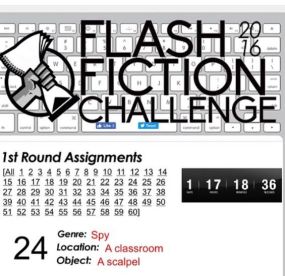 In the Flash Fiction Challenge, by NYC MIDNIGHT, the writer is given a specific genre, the setting, and an object that must appear in the story. The first challenge I had last year was historical fiction. Ouch! That is not at all my style whatsoever. This year, my first challenge was in the spy genre, in a classroom setting, with a scalpel present somewhere in the story. Yes! Now we are talking!! I received the details of this challenge while still on vacation so the whole ride back home consisted of me thinking of ideas. 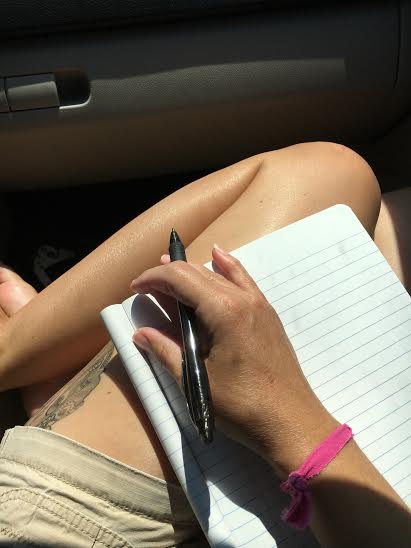 While my son slept, I tried to write and there were a few conversations with my husband that caused him to look at me quite oddly.

“Can a nutcracker break your bones?”

“Would there be a more painful way to break fingers?”

“A scalpel is really sharp right?”

I don’t know how the judges will like my story. I love it, but I wish I could have made it longer, but the rules are  the rules. It is a flash fiction challenge, of course, which means your story cannot be more than 1,000 words.

I see many things that I should’ve done differently; however, the challenge only gives you 48 hours to submit your writing. If you have kids or have other things going on, then you know you don’t really have 48 hours…maybe 5! haha! 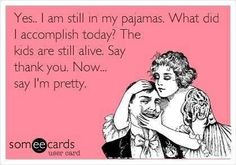 Here is the story I submitted. Please feel free to leave positive feedback or positive criticism. I am all ears. Enjoy! ❤

He took notes throughout class, but not about the history lesson the teacher was trying to teach; he took notes about the student. He had to try to blend in so while other students took notes, he wrote down all the things that made this one person suspicious:

Posture too military and formal. He keeps checking his watch approximately every six minutes. Slightly tanner than others in this cold, rainy state. Bulge in left sock (could be a hidden weapon). Keeps touching his right lower pants pocket (could be another weapon). Student name appears to be “Jonze”.

The bell was still ringing while the teacher was talking. She quickly dismissed the students for the day. As she walked out with them, she looked at him for one second and slowly nodded. He knew this was his chance. He was the last one in the room. He took out his phone from his pocket and dialed.

Just then the suspicious student walked in the classroom. It was just the two of them in the empty classroom.

“The train derailed,” he said in a calm, slow, and quiet voice to the person on the phone.

“Hello Agent Thorp. Or shall I say Jonze?” Slowly, he set the phone down and looked up at the student. He then deliberately rose up so that his height would give him an edge.

Thorp didn’t say a word. He quickly reached behind his back, and shot at him. Three darts were fired. Only one reached their target, unfortunately for Johnson. He immediately became dizzy and the world went black.

He woke to find himself handcuffed to a classroom desk. There was no escape. Worse yet, Thorp was talking nonsensical about his “bag of tricks”.

He had researched his target, Angel Thorp, for years before finding him disguised as a student in public high school. He knows that this seemingly innocent looking teenager is actually a twenty-something spy and murderer-for-hire. Thorp’s idea of a “bag of tricks” is definitely not anything Johnson wants to find out about. He breathed in and breathed out slowly hoping to clear his mind and find a way out. It was useless. He had failed and he would surely die if some miracle doesn’t happen.

Laughter brings him out of his thoughts. He looks to his right and saw Thorp opening up a black bag. From deep inside he brought out two small objects. A nutcracker and a scalpel. He looked at Johnson and quickly whispered nine words.

“I only need two to get the job done.”

Fear struck through Johnson, but he knew he must not show it. Thorp picked up the nutcracker first.

“My boss wants me to do away with you quickly. You know, to just get the job over with, but me? I want you to pay…as slowly as possible. My job will be done and I will never have to worry about you following me again nor getting in my way. Oh how I will enjoy this.”

He walked up to Johnson and took his hand. Before I use this nutcracker to break every one of your fingers, I will give you one chance. One chance to tell me all the names in your agency. Just one chance.

Johnson just looked at him and spit in his face.

Thorp didn’t say anything. He wiped the spit from his cheek and without warning, took the nutcracker to Johnson’s pinkie. Johnson winced, but tried not to scream. He would not give Thorp the pleasure of that. Within five minutes, every finger on Johnson’s right hand, his writing hand, were completely broken.

Thorp walked over to his “bag of tricks” with a sigh and picked up the scalpel. He looked at Johnson and smiled.

“Nutcrackers bore me so. But not this,” he said as he let the scalpel shine in the fluorescent lights. He started to walk over to Johnson. He took his head in his hands and smiled once again.

“Where to start? Where to start?” Thorp mumbled as he brought the scalpel closer and closer to Johnson’s left eye. Just as the blade was breaking through the skin and blood was spilling on the linoleum floor, shots were fired through the classroom windows. Thorp dropped to the ground. Agents in all black rushed through the now open windows.

“Agent Johnson! Are you ok? Are you alright?” the first man in black yelled as he fell through the window.

“I am fine. Just get me the hell out of here and take Thorp in before he can do anymore damage. That little fuck got me good. Now it is our turn to get his secrets out.”

Thorp was carried out on a gurney. The shots that penetrated him in the stomach and leg were only sedatives. He would be awake shortly, but he would be in a cell awaiting interrogation.

Johnson sighed as he left the classroom.

“I am getting too old for this undercover shit.”